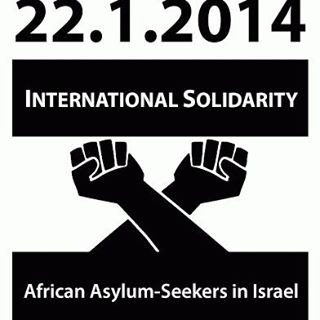 A friend from Israel has send us some really amazing information about the
African political asylum seekers in Israel struggle for freedom and refugee rights
This is what she tells us:

“Don’t know if you’ve been following news from Israel in the past few weeks,
but something *historical* is happening. 60,000 *African asylum
seekers *(mostly from Eritrea and Sudan) have declared a *general strike* and are holding *mass rallies* in all major cities to protest the government’s recent change in
policies, which intends to put them in remote detention centers in the
desert to keep them away from major cities. Hundreds of asylum seekers
already imprisoned in these detention centers are on their 7th day of a *hunger
strike*.

The rallies are reported about in all the major newspapers and TV channels
of the country. This is the first time the issue of African asylum seekers
has reached the mainstream media, especially giving voice to the asylum
seekers themselves and not just Israeli politicians talking about them.

This is the largest uprise of asylum seekers in Israel’s history is
definitely an event on a worldwide scale.

*Photographs from the rallies*:
http://www.activestills.org/theme.php?cat=58

(if you intend to organize an action in your city and wish to coordinate
with the Israeli protesters, contact freedom4refugees@gmail.com).

African political asylum seekers in Israel struggle for freedom and refugee rights – CALL FOR ACTION
International community : we urge you to advocate that Israel stop our
imprisonment and starts respecting refugee rights! Israel’s latest policy
of arbitrary detention for endless time without trial continues to
humiliate our community. We are turning to you for help and asking you to
mobilize towards demonstrations at Israeli Embassies on 22 of January 2014.

In the last few weeks, a range of unprecedented policy changes towards
African asylum seekers and refugees have caused us to take drastic measures
to display our discontent, frustration and fear.

About 50,000 African asylum seekers and refugees live in Israel. We have
fled persecution, forced military conscription, dictatorship, civil wars
and genocide. Instead of being treated as refugees by the government of
Israel, we have been treated as criminals.

The Israeli government members have called us a “cancer”, propagating we
are “infiltrators” that have come to seek employment. The Israeli
Government’s ongoing incitement and hate speech towards us has lead to
racial violence and hate crimes against our community.

On December 11, 2013 the government of Israel passed a new amendment to the
Prevention of Infiltration law, in response to the recent High Court of
Justice (HCJ) decision that overturned previous amendments to the law. In
its decision, the Court called the law “a grave and disproportionate abuse
of the right to personal freedom” and against Israel’s basic laws.The new
amendments allow for one year of closed detention followed by indefinite
detention without judicial review

Inspectors from the Population, Immigration and Border Authority (PIBA)
have begun to arrest and detain hundreds of asylum seekers in Tel Aviv. In
the last week of December 2013, PIBA announced its plan to require
thousands of asylum seekers and refugees to register at Holot within 30
days. Despite assurances given by the Ministry of Interior that families
would not be separated, tens of men with wives and children have been
summoned. Panic has spread among the asylum seekers community in Israel, as
immigration authorities have increasingly limited the ability to renew
visas, leaving people vulnerable to losing their jobs and being arrested.

In the past two weeks, thousands of African asylum seekers and refugees
took to the street in Jerusalem and Tel Aviv to march for freedom, to
oppose arrests, imprisonment and the disregard for refugee rights. We are
now organizing a three day strike from 5 to 7 January 2014. On 6 January we
march to the offices of the UN Refugee Agency UNHCR, The African Union, The
European Union, USA, Canada, UK, France, Germany, Italy and Sweden to
deliver our message calling on the international community to pressure
Israel to stop its policy of detention and deportation and instead to call
on israel to recognise us as refugees and respect our human rights

Specifically, we demand the Government of Israel to:

1. Cancel the new amendment to the Prevention of Infiltration Law; stop all
arrests; and release all asylum seekers and refugees from prisons.

2. Start respecting the rights of refugees, including social rights, health
and welfare benefits.

3. Check individual asylum claims in a fair and transparent way.

1. Hold Israel accountable to adhere to the refugee commission.

2. Monitor our asylum request process from start to finish, in a
transparent and fair way adhering to international standards.

We stand in unity and solidarity with our fellow communities of African
Asylum Seekers and refugees struggling for their human rights in Europe and
across the world.

Our common plight as refugees must be addressed by a joint struggle and
demand for all countries to respect human rights and the UN Refugee
Commission.

What can you do to help?

– Hold demonstrations and direct actions at Israeli embassies and consulate
offices in Europe, Canada, USA and around the world on the 22 of January
2014.

– Send a letter to the Israeli Embassy or consulate in your area to demand
Israel stops its policies of detention and deportation, recognizes us as
refugees and respects our human rights.

– Send a letter to the UNHCR demanding accountability and responsibility
for Israel’s fulfillment of our rights as refugees.

If you are organizing a demonstration or direct action, please notify us @
freedom4refugees@gmail.com

Thank you for your support.