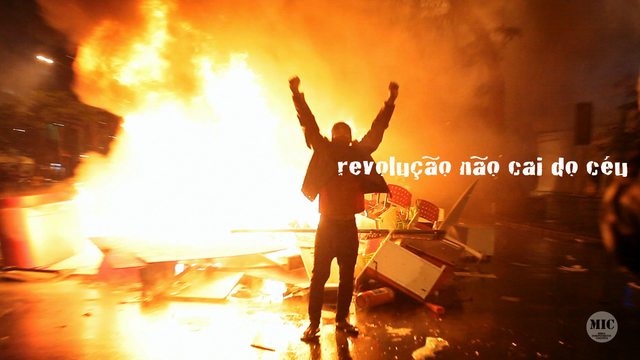 “We were very pleased to promote the response to the State of the Union from Kshama Sawant on Tuesday evening. One of the most important values of the Occupy Solidarity Network, is that we support and promote to our networks, a broad spectrum of ideas and solutions resonating from within the Occupy Movement. Bernardo Gutiérrez’s article talks at length of the importance of networks, and how they help to make possible future organizing by lighting up the supporters of prior actions. Much in the way that we hope to inspire you, those who care about the Occupy Movement, and hope to see real world change emerge.” – Priscilla Grim

Revolution is getting too small for us. Its centenary semantic wall seems to crumble. Indeed, the Internet launches a gunshot of questions to the heart of the meaning of revolution. Revolution is just “a forcible overthrow of a government or social order, in favor of a new system”? The new system will emerge only after taking power? What if taking power after revolution, as in Egypt, comes from the hand of the army? Is it still valid the sequence revolution, counter-revolution, involution? Could it be that the network is building, without taking power, a new system from new protocols and unlikely connections?

A few years ago, the Marxist thinker John Holloway, in his book Changing the world without taking power, began to glimpse the secret ways of the new revolutions. Holloway, enthusiastic with those Mexican neozapatistas, fully questioned the meaning of revolution. Those masked people who built their own world outside the state, those Autonomous Zones of Chiapas, halfway between Hakim Bey´s pirate utopias and the indigenous culture of the commons, deeply inspired Holloway: “In this revolutionary struggle there are no models, no recipes, just a question terribly urgent. Not an empty question, but a question filled with a thousand answers”. Perhaps we do not need a new and unique meaning for revolution. Perhaps it is enough to interconnect the multiple new answers. The writer / activist Douglas Ruskoff has another “Thesis That Questions the Revolution”. In his book Open Source Democracy, Ruskoff argues that the revolution has not arrived and what we are experiencing is a new renaissance. “Renaissances are historical instances of widespread recontextualisation. It is the rebirth of old ideas in a new context. Renaissance is a dimensional leap, when our perspective shifts so dramatically that our understanding of the oldest, most fundamental elements of existence changes. The stories we have been using no longer work”. The Renaissance, the dimensional leap, precedes revolutions. The perspective of the paintings of Piero della Francesca (among others) led to mathematical theory that ended some centuries later with the idea of a flat Earth. The movable type of Gutenberg´s printing machine changed the writer-reader relationship (and blew political structures). The network, connecting peers, reconfigures most definitions. From media to revolution, the meanings of the dictionaries seem not to fit into this new dimension.

The Renaissance, according to the prestigious James P. Carse, was not an “attempt to promote another vision, but that alternative visions promise other visions.” The Renaissance was a new horizon more than a set of answers. A new horizon in the words of Carse, who arose against anyone and formulated a constant invitation to join him.

Perhaps the revolution is not in sight. Maybe we’re just in a deep process of Renaissance. And maybe we do not even need the revolution as we know it. In fact, a pessimistic view of the three years of interconnected revolts that began with Tunisian Revolution in late 2010 would present a grim picture. The army, at the helm of Egypt that toppled Hosni Mubarak. A exagerated neoliberal Government in the Spain shaked by 15M movement – Indignados. The conservative Enrique Peña Nieto ruling México after #YoSoy132 explosion. Erdoğan, leading with an iron capitalist fist, post #DirenGezi Turkey. Changing the world without taking power?

“It is not what Occupy Wall Street has made, but the network that has been created.” The sentence was pronounced by Joan Donovan, participant in InterOccupy, at the meeting Three Years of Interconnected Revolts, held in October in Barcelona. And that casts a beam of light on the underappreciated and networked renaissance that is flourishing in the world. From Tunisia to Brazil, from Turkey to Spain, from Greece to Egypt, the so called #GlobalRevolution is in the details of the created network. #GlobalRevolution, more Enlightenment than revolution, more connections than achieved objectives, make sense looking at the different microcosms. There´s no need for that utopia of May 68, that inoffensive “Beneath the paving stones, the beach” which never materialized. There´s no need for it because interconnected revolts have built its own utopia: tens, hundreds, thousands, of networked micro-utopias.

The prototype, a concept of digital culture, is an important key of this new renaissance: “An early sample or model built to test a concept or process or to act as a thing to be replicated or learned from”. #GlobalRevolution is a system of micro-utopian prototypes, connected amongst themselves and (almost) in real time. Legal prototypes, communicative prototypes, political, urban, cultural, technological… And this networked collective prototypes, within this new, open, process-based world, replaces any fixed model. Maybe we do not need a definitive model for revolution. It may not be necessary to take power. Because these interconnected micro-utopias will be replacing the parts of the system. Gradually, inevitable.

Spanish 15M´s lawyers – Legal Sol, TomaParte – hanging their online documentation with free licenses and working for the commons. Or Ativistas Advogados collective, who defends Brazilian protesters from police abuse. #GlobalRevolution are citizens building self mass communication, as Manuel Castells theorizes. Spanish Indignado´s TomaLaTele, Brazilian Midia Independente Coletiva platform (MIC) or Turkish Gezi Occupy News are micro-utopias shaping a new communicative renaissance. #Globalrevolution is not just a social explosion. #Globalrevolution is the Athens Wireless Metropolitan Network building free connections in Athens, a music festival crowd funded thanks to #YoSoy132 movement in Mexico City or a digital, free library called Bookcamping.cc, born in the heat of Spanish 15M. #GlobalRevolution does not need rigid dictionaries. It could be a king of set-of-links, a reconnection of dispersed hyperlocalities. An infinite open game in which it doesn´t matter not having a goal, but looking for it collectively. this new system of imperfect and collectively improved prototypes – is not what has be done, but the created network. When Spanish Indignados were given for dead, the human created network shaped a new urban self-governed space as El Campo de Cebada de Madrid, that won the prestigious European prize Golden Nica. GlobalRevolution puts at the service of concrete causes a dense networked system that influences media and makes information get viral. That was the case of Gamonal´s riots, a working class neighbourhood of Burgos (north of Spain), rose up against urban neoliberalism, visibly helped by 15M ecosystem in its success in stopping a private parking a a new expensive boulevard.

When many thought that Occupy Wall Street had ended, the latency power of created network invented the process #OccupySandy, that after Hurricane Sandy, helped New Yorkers better than either the State or private industry. #Globalrevolution, more process than aim, resembles the unpredictable Guerrilla of T.E Lawrence that described Arab tactics that, escaping from the logic of classic war, defeated the Ottoman Empire between 1916 and 1918. #Globalrevolution would be, paraphrasing Guerrilla, “an influence, something invulnerable, intangible, moving like gas”. It appears where it is not expected. Is the legion of students from #DirenODTU, replanting trees on the campus that Erdogan wanted to turn into highway. Or the Rolling Jubilee linked to Occupy Wall Street, that buy private debts and then forgive them. Or the #EfectoGamonal campaign that spreads world wide Gamonal struggle and complements the strategy of direct action and negotiation of neighbors.

GlobalRevolution: that guerrilla-gas, flees the classic strategy of the working class, its massive strikes. Without being antagonistic to that formula – some groups work in a self-governed strike of the 99% without unions – #globalrevolution does not find its strength in the stoppage, but in construction. Not in the boycott, but in the movement. In addition, its power is not just replacing the pieces of the system. Its explosive secret lies in the possibility of building their own pieces. Pieces-prototypes openly made in shared flows. Its sting is not, for example, blocking a port, but building an enough attractive port to replace the old one. Or better yet: to create a new system of urban gardens, parallel currencies, micro-ports and a 3D printers network to build objects that will make unnecessary the mega-port of the past.

“Don´t look at us, join us”, sing the Spanish indignados. “Don´t beat the enemy, let them join you”, says Douglas Ruskoff. #GlobalRevolution is not just a social explosion. It is a lever that takes us to a new dimension in which the micro-utopias are replacing the old world, building new spaces, new inclusive processes. Micro-utopias that are shaping a new connecting meta-utopia, atmospheric and rhizomatic at the same time. Who needs, therefore, the orthodox revolution that lives in old dictionaries?

Nothing better to complete this inventory of interconnected micro-utopias, this incipient meta-utopia, as a sentence that Douglas Ruskoff uses to define Occupy Wall Street: “The movement resembles the network in several ways. In part, because it is difficult to conceptualize, because of its peer-to-peer structure. Also, for its ability to tolerate that there is not an ending, but a set of connections. And every connection is a new beginning to something new, and unfolds and unfolds, as life itself”.

Bernardo Gutiérrez is a Spanish journalist and writer. He participates and researches in 15M-Indignados and Global Revolution in general. He is living in São Paulo and the founder of the network FuturaMedia.net.