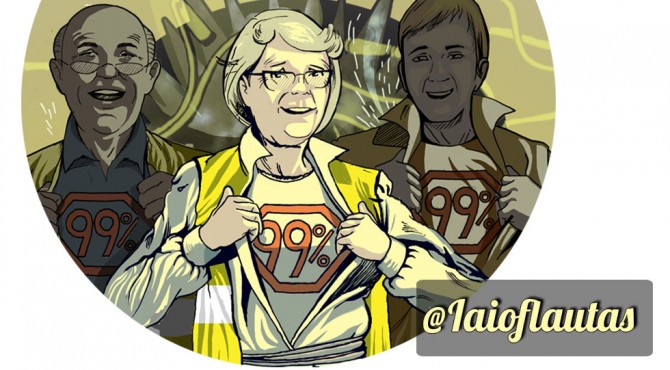 “We are the generation that has fought to achieve a better life for our children. Right now, they are toying with the futures of our children and grandchildren… We stand by them in spirit, at the local assemblies and at all their activities. If they condescendingly call these people “Perroflautas” (hobos) to diminish their audacity, then let them call us “Iaioflautas” (from the spanish yayo, which means grandpa)”.

The Iaioflautas support the young in their fight for democracy and social justice, “against the bankers and their accomplices the politicians”. They combat the rampant speculation, the cut-backs, the privatisation, and the mutualising of the losses, like saving banks with public money. They also support the PAH and all those who have been thrown out of their homes for mortgage debts. They are to be found in 11 cities, 4 of them in Catalonia, and are active on both facebook and twitter.

On October 27, 2011, the Iaioflautas occupied their first bank, Banco Santander in Barcelona.  This particular bank was picked as a starting point for the day of actions against banks because its director, Mr. Botin, denoted that the banks are the doubtless winners of the economical crisis. This man has a personal fortune of about 1,7 Billion Euro. This was just the beginning of a campaign to occupy banks (i.e. La Caixa in Badalona), through which they still protest against the bankers and the financial oligarchy, who “ruin the lives of 99% of people”.

In June 2012, they started a nationwide campaign, coordinated throughout the entire country, with the purpose to read out their manifesto in Deutsche Bank branches (in Sabadell, Mataró, Palma de Mallorca, Castellón, Córdoba and Sevilla). Their manifesto dealt with increasing democracy, abolishing the financial dictatorship, salvaging people instead of banks, and cooperating of “our German brothers” with all other Europeans. In Barcelona, one partaker of the movement went to the Deutsche Bank to confuse the police, while the others took to the German consulate to read out their manifesto and talk to the consul. Later on, they marched to Barcelona’s centre, singing traditional songs of resistance and making their support for the striking miners known.

Having not only banks for a target, they have also occupied a bus to protest again cutbacks in the welfare state. Among the further topics the Iaioflautas are against is the usage of rubber bullets by police and the criminalisation of peaceful protest.