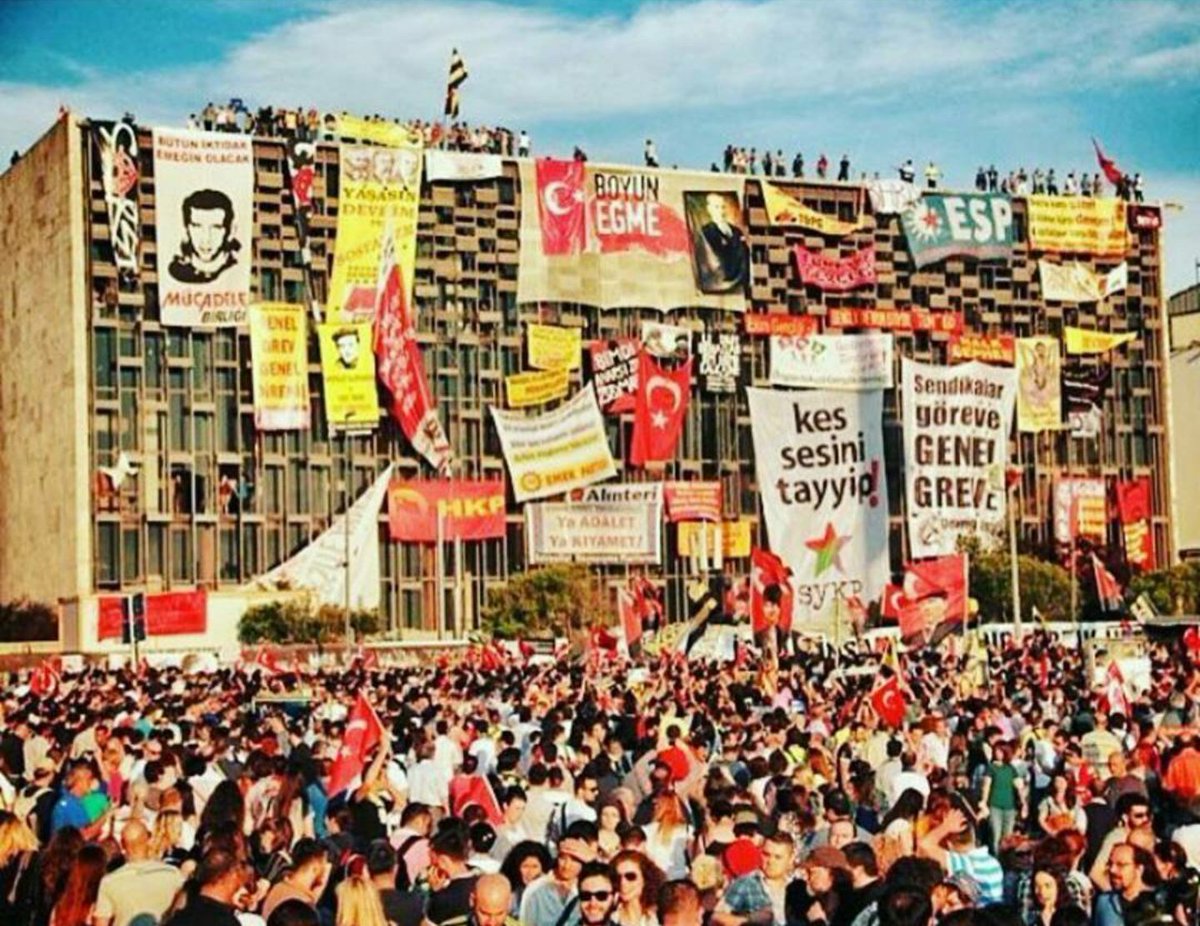 NEWS CENTER – Taksim Dayanışması, the press conference at the Chamber of Architects announced the 4th anniversary of the Trip Resistance activity program.

It is stated in the statement that on 27 May Istiklal Caddesi will meet at the Earth Court, and on May 31, Taksim will travel to the Gezi Park.

TMMOB Chamber of Architects at the press conference held in Büyükkent Branch “Travel 4 Years Old! No, we are going to continue fighting! “Architect Mimcella Constructor read the statement.

Taksim Dayanışması name on behalf of the world, the example of hope; The rulers were afraid as a ghost, they did not drop from their tongues.

“Four years ago we gave shoulder to shoulders in front of those who attacked their living spaces with unrelenting and unlawful violence, especially Taksim Square and Gezi Park.

We have enlarged our solidarity with the creative intelligence of our young people, the embracing compassion of our mothers, the power of our workers’ brothers and sisters, the lively voice of our women, and the lively voice of our LGBT individuals. In response to this honorable resistance and universal solidarity, we breathed into the day-to-day politics of the helpless and the cowards, from day to day, to the violence and injustice of the sun,

The world is an example; The rulers are afraid like a ghost, their tongues do not drop Gezi resistance is 4 years old.

In righteousness, they saw; When we come together we love each other very much.

Visually; We can say that when we come together we can stay in the dark.

Visually; We resist our parks, our future, our children, our families with all our colors.

Visually; When we come together we build our dreams that we dream of.

And we have seen that for 4 years now, we continue to say NO to darkness, violence, injustice from Gezi.

We are aware of the darkness that surrounds us more and more every day for 4 years.

We live in a political climate in which neither the international contracts nor the ECHR criteria are taken into consideration, and the lawlessness and arbitrariness are blessed. We know this pleasure better than the process of our journey. We have not forgotten how police violence, which is powered by the ruling proprietors and does not recognize the law and the rule, darkens our lives.

We are witnesses to the fact that some of our friends lose their eyes, that thousands of people are injured, and then that the imprisonment of the factions and the imprisoned are fed by such a rule of misdemeanor.

The police and gendarmes who killed Ethem Sarısülük and Medeni Yildirim, the owners of the deadly kicks leading to Ali İsmail, Abdullah Cömert, Ahmet Atakan, the pepper grenades that killed Berkin Elvan from life, the mafia busters that hit Hasan Ferit, We know that the recklessness that takes Mehmet Ayvalıtaş from us is powered by this lawlessness.

Everyone from freedom, democracy, peace and nature is tested with hunger, death and imprisonment, and immorality, corruption, massacres, harassment and rape are rewarded with impunity; The cost of killing a human being is less than the cost of court; We see that the bones of his son who was hungry for the bones of 80 days old child were sent by cargo.

How everyone embraces unlawfulness, injustice, and unscrupulousness in the face of those who demand the rights of everyone who wishes to keep their hands on the couch; We learn by arresting the parliament for the demobilization of the parliament, by experiencing how they need it.

We have all lived together how the constitutional referendum, which was carried out in an unfair and unequal environment from the beginning, was shaped by theft of votes. We have all seen together how the votes of those who want democracy are tried to be usurped.

We do not give up our solidarity and independence in this darkness where the people who are pursuing the life that we have for peace, freedom, equality and solidarity on the trip have been tested with KCCs, exports, starvation and arrests. We call this darkness which is placed under the name OHAL, injustice, talana, violence, punishment in the light of the power and gains we receive from Gezi.

You know; Traveling resistance has taken its place as a page of honor in the history of this community. Tripartite resistance, which is an example in the world, is being tried to be criminalized as the crime element in the cases where the most basic right claims are tried to punish illegally. We reject it, we do not allow it to be blacked out because of its own lawlessness and fear created by its dishonor.

We repeat with the power we created from our relationship in a park four years ago; Taksim Square and the excursion park