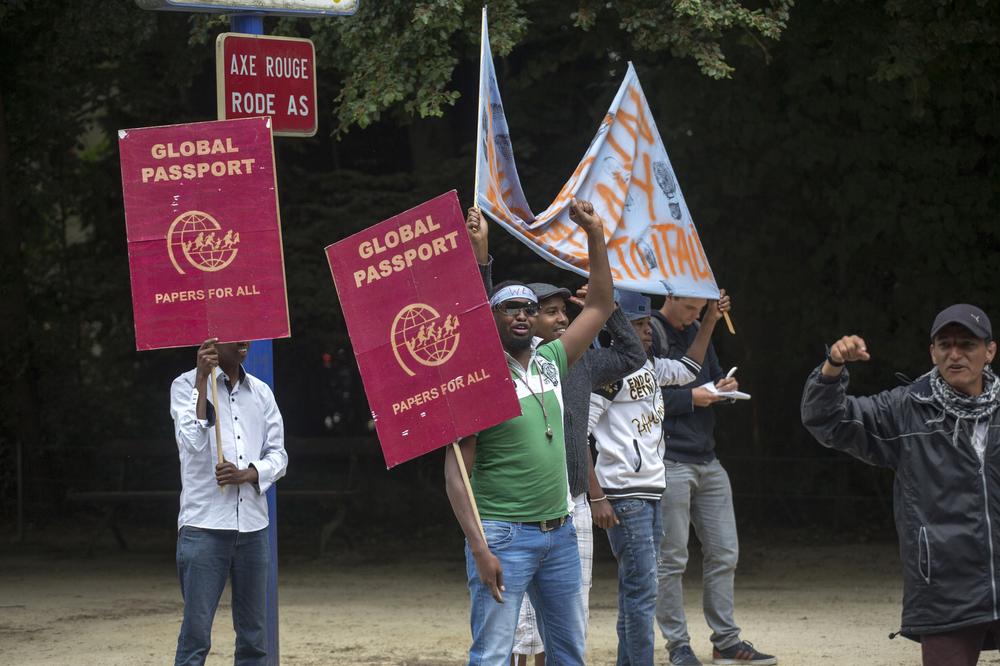 Struggles are continuously taking place everywhere, people are fighting for their rights all over the globe, but our memory has an overflow of information, it tends to archive past struggles and move to the next. But we are also aware that all our struggles are connected, rights are being removed everywhere, capitalism is a predator, but feels the threat of the uprisings.

Since 2011 uprisings in several countries took to the streets, the squares were taken and people started overcoming the fear of talking aloud, and then something unprecedented happened, we were not only fighting locally but we were able to surpass our own borders and connect globally and recognize ourselves in other people’s fights.

Now we’ve taken a step back, repression has increased, “powers” want to install the culture of fear between people, and its our responsibility to overcome it.

The March for Freedom, was a self-organized initiative after taking to the Oplatz square, in the heart of Berlin, a movement for the rights of refugees, freedom of movement, right to stay, it was a powerful moment, empowering, where all different kinds of groups came together to denounce the politics of isolation, repression, segregation, violation of Human Rights in Asylum laws, and there were some wins like the withdraw of Residenzpflicht, which meant that an asylum seeker could not move out of the area where their asylum was being processed, invisible borders within Germany were built.

The MarchFreedom not frontex for Freedom aimed to march through Europe, refugees and undocumented people challenging Fortress Europe , crossing the borders, making visible their absurdity, while denouncing Asylum politics, they received support from the people living in the towns and cities on the way, creating awareness that people is people. The actions done during the march were based on tactics on civil, nonviolent resistance, on marching, peacefully crossing national borders, or visiting lagers, singing and shouting slogans to identify and unmask authorities for their inhuman migration policies, against Dublin II and Dublin III

When the March for Freedom reached Luxembourg, parallel was taking place a meeting of the EU Inner ministers. As affected by the policies discussed in a closed room, the March for Freedom asked for their right to express, the talk about their needs. A demonstration was organized in front of the Conference building where the European Council meeting dealing with Schengen. We can read their daily report. The police reacted to their presence more violently than expected, they ignored all the attempts to talk with them. Pepper spray attacks, beatings with batons, kicks and bites of the police dogs were the only answer received by the March for Freedom. During the day of action on May 5, 2014 there were thirteen brutal arrests at a demonstration on the Kirchberg in Luxemburg.

The violence used by the police is obvious and has been broadly documented, you can check these photos, videos, even some people denounced the police abused to the Luxembourg ambassadors in their home countries. We encourage you to hear #WeRadio show about the topic.

But, two years later, and with no previous evidence, 6 activists have been accused of “arm rebellion”, and of use of violence against police. Three of the activists are asylum seekers and three are supporters of the refugee movement. The trial will take place the 5th and 6th of April 2017.

Our goal now is to make our voice loud again all over Europe denouncing the Asylum politics and the criminalization of people fighting against them. Denouncing colonial politics around the world, stop the support of dictators accomplices of EU goverments

The trial was full of mismanagement, the translators were not well prepared, the defendants were not recognized as aggressors, the weapons of the so-called “armed rebellion” were not identified, the police mistreatment(knowing one of the defendants ended in hospital) was not addressed since the defendants didn’t have the space to give their version during the trial but still the activists got sentenced.

You can see the live stream of the Press Conference given by 3 of the defendants in Berlin on the 22.05.2017, it’s in German and Arabic

Or the audio of the press conference

you can translate, talk about it to your people, make public support statements, collect donations, sum your creativity by creating images, posters, poems, music …