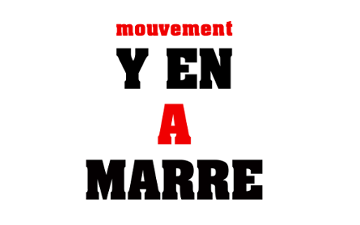 Following is a translation of several of the concepts that we find more relevant regarding the movement Y en a Marre, the text is directly taken from their website

On the night from 15 to 16 January 2011, in a room at the Villa nª 07 in the neighborhood Parcelles Assainies in Dakar, a group of young people decided to finish with fatalism: two commited artists(Thiat and Kilifeu from the group Keurgui de Kaolack), two journalists (Fadel Barro and Aliou Sané), a student (Elh Hadj Abdoulaye Niasse), a bank executive (Marie Ndella Guèye), an IT engineer (Denise Sow) and  Amath SECK.

Around a glass of tea, came out the idea of creating a social movement called “Y en a Marre”, after many hours of intense debates about the situation in the country. A crisis situation (high cost of living, electricity cuts, financial scandals,etc) in a dangerous political context: The governance system installed and maintained at the head of the State, based on nepotism, political clientelism, corruption and impunity had undermined the founding principles of the Republic, perverted the moral and social values and divided the senegalese nation.

To this new iniciative joined, very quickly, other figures of the Hip-Hop movement like Malal Talla alias “Fou Malade”, Simon Kouka, Djily Bagdad. On January 18th 2011 the framework that now groups all the fringes of Senegalese youth was launched. With time, Y en a Marre has become very popular and has members along all the country and in the diaspora.

At a nationa level, Y en a Marre it’s composed by a wide network of “Esprits” who act as cells which represent the different localities in Senegal. This groups are created mainly by young people in each locality, who are promoting dynamic participation at a local level.

Since the beginning, citizens identified as Y en a Marre mobilise around the whole country and in the diaspora to create local cells or “Esprits”, to care specially of the specific problems in their own localities. The founding members have played a special role in creating this dynamic to make sure that all those who want to become part of Y en a Marre, find the way to do so in their own places.

Y en a Marre Esprits have the following decalogue: