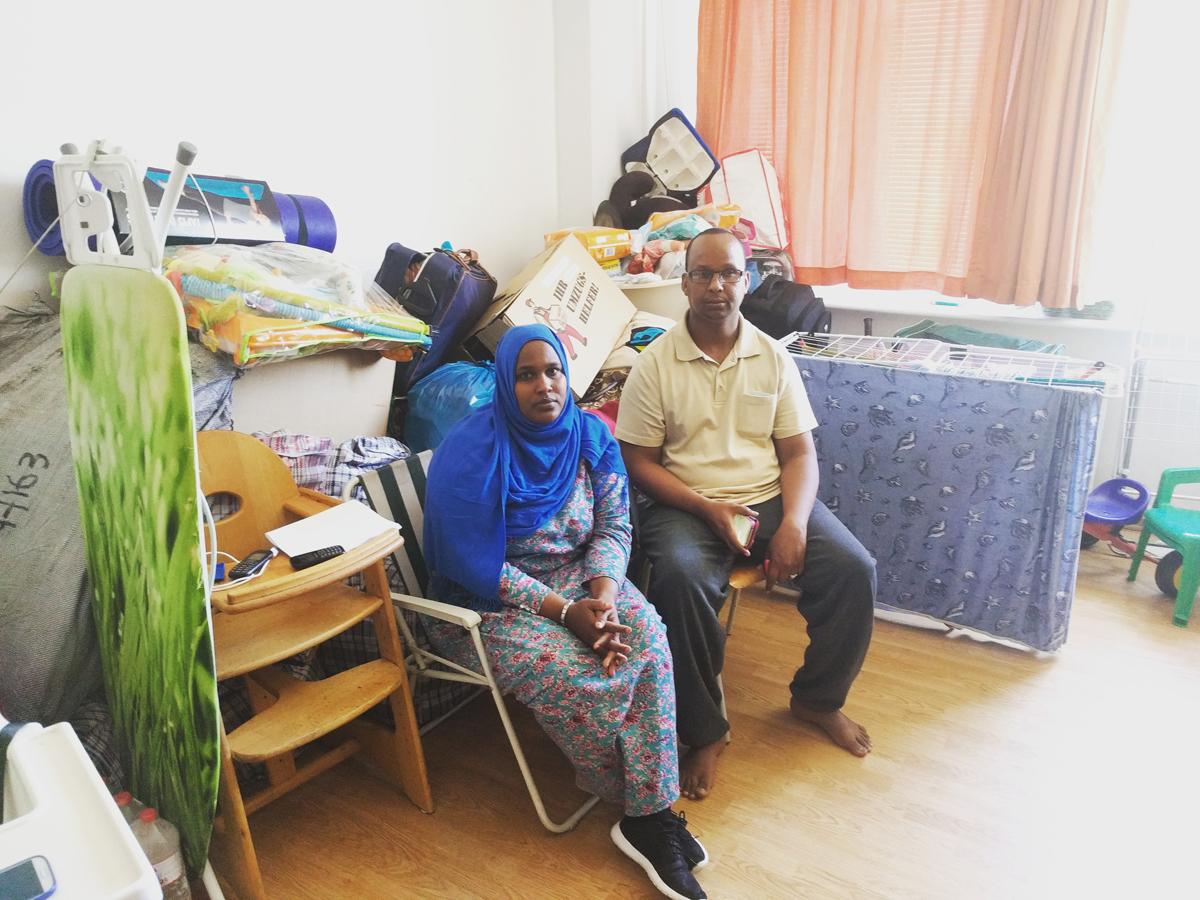 Source: Give something back to Berlin

Forced to relocate miles from her children’s Berlin kindergarten, Halima Farah, an intelligent, resilient and resourceful woman, has been working to find a solution for her family. But she faces a lack of support from those entrusted with her welfare, violence and intimidation from building management, and bureaucratic delays at a time when every moment is more precarious than the last.

I went to see Halima on a sunny Friday morning. She lives in a pretty, quiet and orderly town—which made the clutter of white goods piled on the lawn of her home all the more disconcerting.

Halima and her husband are from Somalia. With their three young children, they’ve been based in transition accommodation in Teltow, at the end of an S-Bahn line to the southwest of Berlin.

In April, after four years in Germany, the family were granted refugee status, which allows them to work and move around freely. “We finally felt like we could start getting on with our lives,” Halima told me.

Then, at the beginning of May, the residents of the home were told they had to leave, with just 20 days’ notice.

“When the closure was announced, the manager personally assured me that the women and children would be able to stay in the region, with priority given to children in Kita (day care),” Halima explained.

Running out of options

So they waited for news. Almost two weeks later, just days before the eviction date, the family were told they would be re-homed in a one-room container in Brück, a small rural town on the very edge of Brandenburg, miles away from the children’s kindergarten and the family’s support network.

Kindergarten places in Germany are a lottery at the best of times. Halima has been paying for her children to be in the Teltow kindergarten for the past three years. If they relocate to Brück, they’ll have to start again from scratch, with years-long waiting lists for each kindergarten place.

“The other families have been sent to homes in the area,” said Halima. “We are the only ones going to Brück.” As well as the problematic location, the space they’ve been offered is not even large enough to accommodate their modest belongings, never mind the five of them.

“I’ve never heard of children being taken out of school,” says Halima. Public transport between Brück and Teltow takes two hours each way—but this isn’t just about inconvenience. Two of her children have health problems, and their doctor has written a letter to explain they need to stay nearby to receive ongoing medical treatment.

According to Halima, the authorities are adamant that there are no other alternatives. They were offered a house in Brandenburg—a compromise the family are willing to accept—but it’s undergoing renovation and won’t be ready until August. “What will we do until then?” Halima asks. “We are talking about my children’s future.”

“And when will I go to school?” She adds. “I’ve already wasted four years.”

In a statement, Kai-Uwe Schwinzert, press officer for the the local authority of Potsdam-Mittelmark said, “the social and housing service has done its best to rehouse affected families in a familiar environment close to schools, jobs and day care centres.” It claims to have offered “various accommodation options” to the Farahs.

“In view of the family’s current situation, we are in daily contact with them to find an apartment,” said Mr. Schwinzert.

Intimidation, abuse and a lack of responsibility

The Teltow home is almost deserted, save for a few removal men and security guards. In the absence of options, the Farahs remain in their single-room residence while they try to figure out a solution.

But since they are no longer legally permitted to be in the building, they’ve been told they remain there at their own risk.

“Things here are getting worse every day,” says Halima. “They are threatening us.”

A few days before we met, someone switched off the family’s electricity supply. In the altercation that followed, between the family and the Hausmeister (building janitor), a security guard from the building next door physically assaulted Halima’s husband.

Later that day, the same man sprayed toxic insulation foam around the door of their room while the family cowered inside.

“A while afterwards, he came inside the room and wouldn’t leave,” Halima told me. “When we asked him his name, he called himself ‘the Hunter’.”

That time, they reported it to the police.

People regularly bang and kick on their door, too. Halima says she can’t be sure who is carrying out these intimidation tactics. But ultimately the responsibility for what happens onsite is with the Hausverwaltung, or building management company.

As Halima was showing me out, a man who identified himself as the building manager asked to speak to me. He told me he worked for the Hausverwaltung—a company called H&S—and was responsible for securing the site, and that he needed to switch off the electricity and water. He declined to give his name, but reiterated that the Faras “have been offered alternatives, and need to leave”.

I later heard from Halima that after I’d left, the same man chased her back through the house, shouting and harassing her to the extent that the noise drew a small crowd.

When I contacted the area’s only Hausverwaltung called H&S, they replied immediately to deny any involvement with the property or its management.

Meanwhile, Halima has been looking at apartments in Teltow. Before she can apply to rent privately, she needs a document to prove her income from the Jobcenter to qualify for subsidised rent. But bureaucracy is slow. The Jobcenter has sent Halima away several times because “the paperwork isn’t ready”.

“All we’re asking for is some time,” says Halima. Once the proof-of-income paperwork comes through, things should be easier. But while they wait, the family are stuck in their room in an otherwise empty building, living in limbo, at the mercy of ruthless building managers and renegade intimidators. No one, it seems, wants to take responsibility for their plight.

The Faras are not unreasonable. They’re not demanding. They are simply a seeking a solution that doesn’t undermine their humanity and upend the lives of their young, vulnerable children.