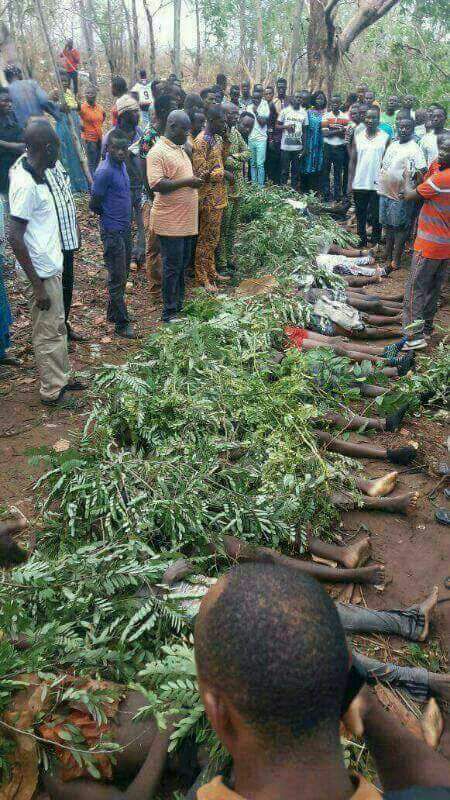 For long the situation in South Cameroon is being silenced, almost no information passes through, in the last weeks, we are in touch with people there who are sending us information, pictures and videos of the killings taking place with no reaction from the international community. As TTS we will try to break with this silence and we would ask you to spread the word around you too.

We publish the following letter, hopefully we will be able to give updates about the situation regularly.

A UNILATERAL LETTER OF CONDEMNATION.

I Edwin Boye Kinga born in the part of the world, documented in the archives of both the League of Nations and the United Nations Organisations as the British Southern Cameroons represent no one. I just like to air out some views so that I could have some element of peace in my heart and in my soul.

I like to see a world that does not feed fat on the tears of the poor. I like to see and live in a world without any double standards especially when such perrenially favour the vantaged and rich over the poor masses. What use does any system provide if it gives undue rights to the ruling oligarchs while depriving the basic human rights to the rest?

I condemn in the strongest possible terms the murder of my brothers and sisters for more than a year now with no one to speak out for them, just because they state out historical truths and seek under universally accepted standards in a sytem imposed on them by the now mute U.N.

I condemn the torture and looting, the rapes and gruesome hardship metted on our people by soldiers, police and other wings of a fascist military that seem to be hungry for the blood of harmless human beings.

I seek to condemn as an individual, all the persons and institutions that humanity looks up to as their moral refuge for remaining silent in a time as bad as this: the MPs of our people for their cowardice, the state media for nefarious and consistent lies that do untold damage to truth and history, the regular state institutions for branding our people a priori as terrorists, dogs, rats etc in order to plunder them at will and even for unconstitutionally calling our people separatists and sesesinists thereby misleading the uninformed world. All the other institutions such as religious and cultural have not met the expectations of the stranded and volatile masses who find nowhere else to go.

I condemn the hate propaganda on social media against our people even though I forgive the perpetrators of this hate agenda because many do so out of ignorance . For the most part they have no historical roots and depend largely on their political leadership and state media both of whom are as tied to French interets as is a dog to a chariot. And history proves me right.

I condemn the sickening silence of major international organisations: the U.N., the African Union, ECOWAS as well as the main news outlets of the world. Our people have been on the streets all over our territory for about a year to make their legitimate voices heard in vain. They have taken to the streets in France, Germany, Japan, Spain, the UK, Canada, South Africa and even in Kuwait of all places. The various states of the U.S. have seen us but paid no attention. Do we not belong to planet earth? Did we ever remain silent at any point in history when horror stroke? We cried with you when terrorists stroke the UK, Spain, Belgium, Somalia, Nigeria the U.S.A. and so on. We joined the world actively when disasters stroke such as the horrendous hurricanes, earthquakes and even the controversial Ebola. I remember how the proprietors of the world rallied in France when that nation lost 12 citizens. What crime then did our people commit that we are battered to peices for months while the world wathes in silence and uninvolved? Is it true that the gains from the trade in in arms has a higher bargaining power over our lives?

I condemn you, the political elite in Yaoundé for allowing yourselves in Machiavellian fashion for letting the “honneur de la patrie – La France destroy your sense of objectivity to the effect that you are consistently murdering other Africans. History will be your judge.

Why did the League of Nations decide to divide the German colony of Kamerun into two and give them to the British and the French respectively?

Why did the United Nations adopt the responsibility of ascertaining the preparagon of the aforementioned territories towards self rule?

If the U.N. herself stands aloof in a conflict whose very origins she is, where else could a stranded people turn?

I stand with you my peopl. I feel bleeding in those whose limbs are torn to peices by the military on rampage. I feel the pangs of prison torture from afar praying for each and every single prisoner. I share fully in the pain of every family that has lost a brother brother or sister, a father or mother. I am with you in the pains from the raping of our loved ones by the uniform officers, who, acting like beasts and with impunity have treated us with a dignity unworthy of human beings.All these keep my eyes open all night when I pretend to sleep.

But we shall rise, my people. Do not ask me when and how. And things shall never ever be the same again.