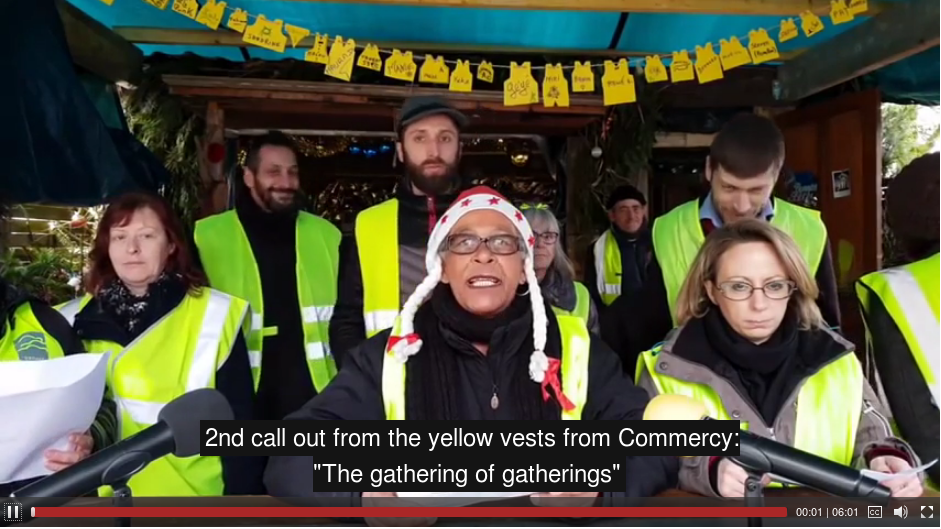 In Commercy, a small town of 6,000 people in Lorraine, the yellow vests have launched an appeal. They are calling on a national coordination of local gatherings, to unite the movement and to give it a structure.

“From Commercy we are inviting all local groups and gatherings to a national gathering. We suggest hosting the democratic gathering in January here in Commercy with all delegates present, so that complaint booklets can be collected and combined. We also suggest to use this meeting to consult on what the next steps of our movement are. Finally we suggest to decide on a collective organisational form of the yellow vest movement, that is democratic, popular and respects the delegates system. Together we will manage to organise the assembly of assemblies, the Commune of communes!” (from the video)

The meeting is planned for the 26th and 27th January. Révolution Permanente commented that the call out “will help to overcome a significant obstacle to the movement. It could allow for the creation of a grassroots democratic structure.”

While the number of participants of the Yellow Vest movement decreased during the Christmas holidays, the movement gained momentum again on January 5, as 50 000 protesters took to the streets all over France, showing that they were not ready to give up on their demands. Violent clashes erupted in Paris, as many protesters were determined not to retreat in front of the police violence: images showing the door of a French Ministry building being attacked with a forklift truck as well as an ex-professional boxer attacking a policeman went viral, with many expressing their support for the protesters, to the outrage of the media and the government. The latter has announced on Monday 7 January that an increase in repressive measures against the movement will be taken.