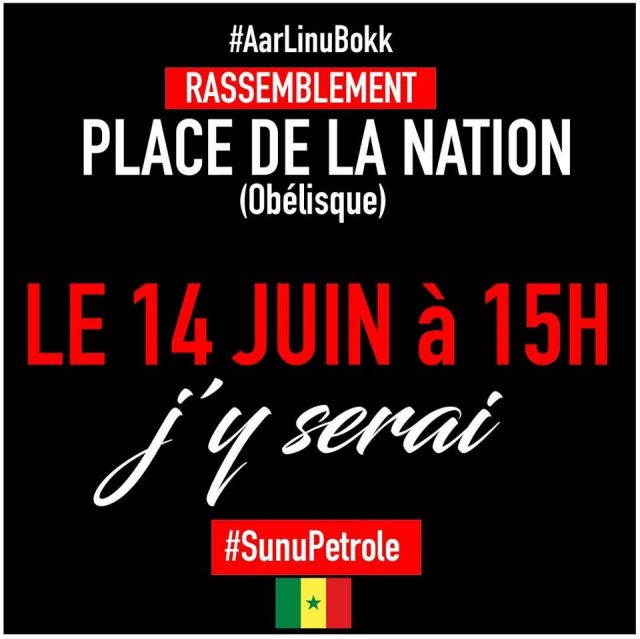 14.6.2019 Senegal the platform AAR LI NU BOKK, meaning “Protect our common wealth” in wolof, did a call to take to the streets to denounce the plundering of natural resources in Senegal, particularly Oil and Gas.

Previously the movement Y EN A MARRE, in a public declaration addresses the fact that there is a need of transparency when managing country’s natural resources and that it has to come to an end the plundering and corruption installed in the system.

The result was that the protest was not allowed to take place, arguing potential violence and public disorder problems. Still lots of people went to the streets where they found police repression, and a couple of dozens of arrested people until night time.

The diaspora as groups in solidarity have also mobilised at an international level, as is in Paris, London, etc.

Why did the protests start?

3.6.2019 UK, BBC releases a video showing a new case of corruption, an energy scandal where are involved again a money landlord, a corrupted politician and a unscrupulous all-for profit corporation, another plunder of natural resources, this time in Senegal.

Frank Timis in the role of landlord, showing himself as philanthropist , as he has” ensured that his group of companies operating across Africa, takes seriously their commitment to transform the lives of the communities they work in” while doing business in other West African countries, but who has been accused of bribery, lying to investors and links to human rights abuses.

The brother of the president, Aliou Sall already in the spotlight in 2016 accused of nepotism, has shown another corrupted politician, brother of the President of Senegal Macky Sall, who when entering into office said he would fight against corruption. Still the main sickness of democracy wherever it is, in western or non-western countries.

BP a well-known corporation not only for working in the oil industry but also for not accomplishing minimal security measure who have led to deaths of workers, pollution, etc.

It is clear that what is happening is not only a socioeconomic issue, where again a country is being looted and their right to manage their own resources taken away. The management of BP is also an environmental risk for the region, a health risk for the population, a corruption case in a so-called democratic country and another example of still-ongoing colonialism.