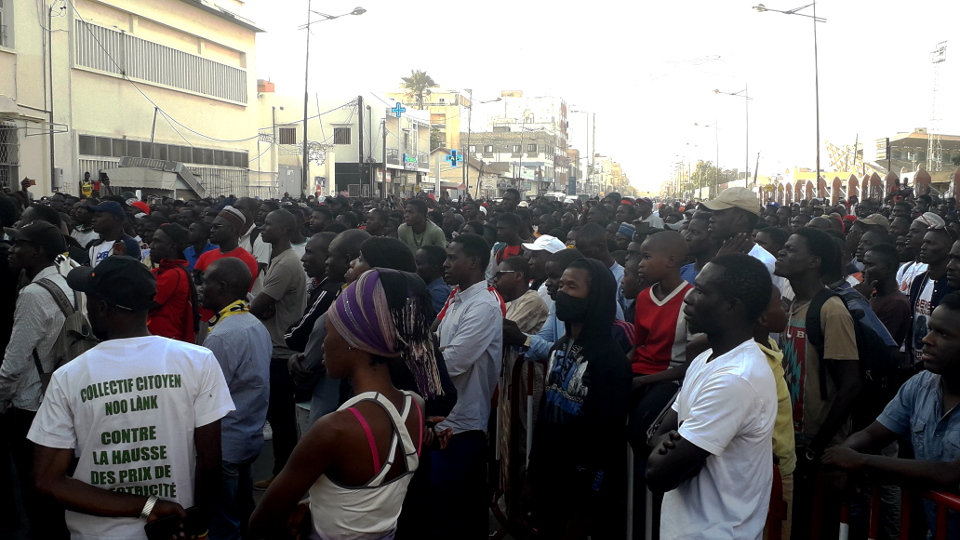 Since the president of Senegal, Macky Sall, decided to raise the price of electricity, the collective Ñoo Lank was created, it’s supported by AAR LI NU BOKK Platform, that gathers different social actors, like M23, Rado, AFRAP, YEM, Students of University Cheikh Anta Diop and many other collectives.

In the last weeks, Ñoo Lank have been bringing their campaign to the neighborhoods by distributing flyers, and explaining why the rise of price should not be accepted and has to be drawn back.

In many occasions the distribution of flyers ended up in the detention for several days of Ñoo Lank members, even it was peaceful and no disturbs took place.

This rise of price does not come along with an improvement of the electricity system, the guarantee of access to electricity in every town of the country or a electricity service without cuts.

Taking into account that electricity is a basic need, and the unemployment rate is very high, the average income very low (around 300 € per month), the decision of rising the price just means to strangle the family economy for no justifiable reason.

Also we cannot forget, Senegal has a negligent Government led by Macky Sall , bad management of its economy that cannot guarantee basic rights such as education or health care for all, and corruption cases like Mame Mbaye Niang who diverted 29 million from community agriculture(prodac), Head of the Coud University (Cheikh Pumar Hann), Post ex-head executive (Ciré Dia), and the last biggest petrol scandal who was discovered summer 2019 and affected the current president’s brother, Aliou Sall and Mamour Diallo (petrol) [1]

Today Friday there was a call for a march between the UCAD and Poste Medine round-point. The march started remembering Balla Gaye , who was killed in 2001 during a student strike, it even looks like he was not taking part and the case has not been resolved by the police. Every 31st of January his death is commemorated.

A couple of thousands of people came together to start marching at around 16h, showing the outrage of Senegalese citizens and demand to draw back the raise of electricity price, together with the claim to release Guy Marius Sagna in prison for two months.