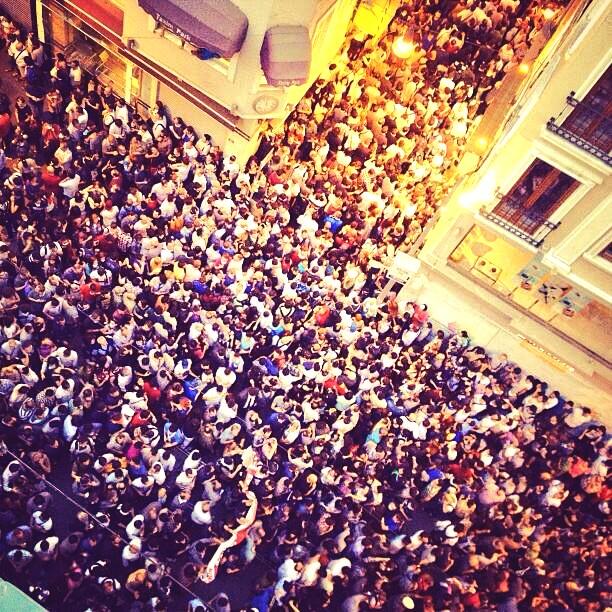 Dear Comrades, Dear Friends of the fight,
As we all know, especially the youth and the peoples of the world are rising in rebellion. In the Middle East, North Africa, Europe, Chile, Spain, young people took the squares and to the streets for raising their voices against unemployment. Even more painful with each passing day in our country ,unemployment has become a big problem, as well as the universities are blockaded by the Higher Education Institution being the council of the military coup and AKP(Justice and Development Party) Government has been trying to take the whole country under its own hegemony and getting more autocratic day by day, against all of these unfair effects ,as the young we haven’t kept in silence as well.
Before the elections, on 8th-9th-10th of the June in Taksim Square, our boykott and reasonable calling attentions to injustices will be serve as a warning to the government ,you should read our announcing text at below.

Tunisia,Tahrir,Madrid now İstanbul…
Against unemployment and Higher Education Instution
COME ON THE YOUNG TO THE SQUARE!

As we realized that nothing is the same as they said. The More we work, the better future is not expected. .As we work we don’t earn, we don’t earn.

We are faced with unemployment and poverty deemed proper by AKP.
Ohh for their followers??For them, many tenders,the crazy projects,..

The more people react to this ,the more conditions get worse.
The anger of young people exposed to squiting pressurized cold water, using pepper gas on them,striking with a truncheon, advance on them with panzers…

Now it is time to recognize our conditions, it s time to end this affairs

Bosses are stoking their pockets with our future.
Our future has been stealing from us and it is we to put a stop this.We will take back our future from the ones who are encoding our future and taking the bread out of our mouths.

In Tunisia, as in Tahrir, as well as in Spain, as in Taksim, the young people will fill the squares.
The Tksim Square on 8th-9th-10th of the June will be of youth. Three days three nights we will be in Taksim Square.
We will meet at 12.00o’clock at Taksim Tram Station.
To take the future in our own hands,COME ON THE YOUNG TO THE SQUARE

Information as to content of our boykott
– Our boycott will start on 8th of the June , at 13.00p.m at Taksim Tram Station and go on up to 10th of the June, will continue 3 days 3 nights.During 3 days we will be in the Taksim Square.
– Our friends coming from Spain will be together with us.
– Various musical groups will be with us , will sing the song of boycott,resistance together.
– Unions and non-governmental organizations ,political party representatives supporting our boycott will be together with us.
– We will pitch out tents in the following days of the boycott.
– We will conduct the discussions with all participants and take our decissions altogether.We will compose an example of the direct democracy.
– We will organize everything in the way of incorporating with all participants and let them put into words their demands freely.
– By setting up a liberty platform, we will let all participants’s say their ideas.
– Requirements,organizations, etc.will be controlled by the committees established in the square and will form a collective working culture.
– We will form a culture which people are in solidarity and sharing not in the competition.