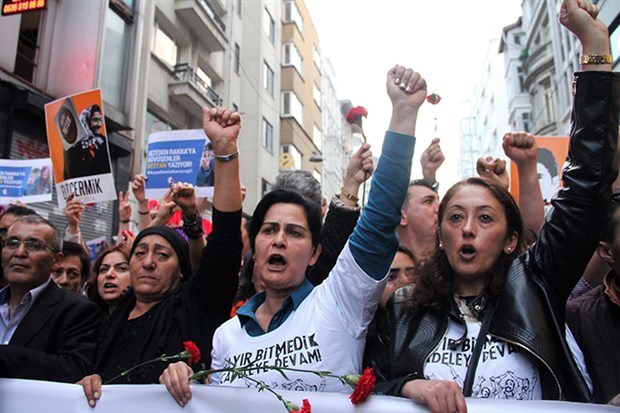 On the fourth year anniversary of the Gezi Resistance, thousands gathered in İstanbul’s Taksim square on Wednesday (May 31) evening.

As the Gezi Park and its surrounding had been blocked by police barricades earlier, the group met in İstiklal Street and marched to Taksim Square.

In a press statement, representative from the organizer of the march, architect Mücella Yapıcı, said ‘those in power are still afraid of the spirit of Gezi, as it is observable from their constant reference to it’, as BirGün reporter Zeynep Kuray reported.

In addition to messages commemorating the Gezi Park resistance, the crowd also emphasized their opposition to the shift in the governance system of the country, which was brought about through a rigged referendum held in April.

Slogans chanted included: “No! It’s not over yet!”; “Everywhere is Taksim”; “This is only the beginning”; “Nuriye and Semih are not alone”; “From Gezi to Raqqa”, and more.

As the police stopped the march, the demonstrators sat on the ground to protest the blockade.